The plants that have impacted on my career and life 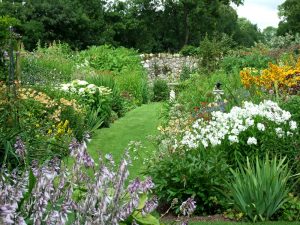 The Carlow Garden Trail is delighted to welcome John Anderson, Keeper of the Gardens at Windsor Castle and Savill Gardens. John shares a lifetime of experience in gardening from working as head gardener at Mount Usher Gardens in County Wicklow to the coastal garden of Inverewe, the National Trust for Scotland’s premier garden. From there John worked at the world famous Exbury Gardens, home of the Rothschild 200 acres of woodland gardens and in his current role explains what it’s like to garden for the Queen!. Afterwards take a stroll around the stunning walled garden of Hardymount. A very memorable afternoon is promised!

Ireland’s Ancient East is renowned for its local produce – there are few places that you will enjoy a more delicious afternoon tea than at Hardymount Gardens, where a sumptuous spread prepared by Sheila Reeves Smyth and her daughters is enjoyed on the lawn area.

In aid of cancer research

John Anderson trained at the National Botanic Gardens, Dublin and The Royal Botanic Gardens, Kew, England.  His first gardening role was the position of Head Gardener at the famous Mount Usher Garden, Co. Wicklow. He made many changes and plant introductions over the period and wrote a plant inventory before he left in early 2002. For the remaining part of 2002 Anderson travelled in the Southern hemisphere especially Australia , Tasmania and South Africa. On his return  in early 2003 he took up a new post as Head Gardener at The National Trust for Scotland premier garden at Inverewe in the north west corner of the Highlands. This coastal 40 acre woodland garden boasts some of the finest tender rhododendrons amongst a wealth of tender and exotic perennials in these islands. Three years later he headed south to the world famous Exbury Gardens, home of the Rothschild 200 acres of woodland gardens along the south coast of Hampshire. After ten great years managing and directing this spectacular garden it was time to undertake a new challenge and in June 2016 Anderson became the fourth keeper of the gardens at Windsor Great Park with responsibility for the Savill garden, the 250 acres Valley Garden and the private garden of Windsor Castle Frogmore. Currently vice-chairman of the RHS Woody Plant Committee. Awarded the AJ Waley medal for rhododendrons in 2014. 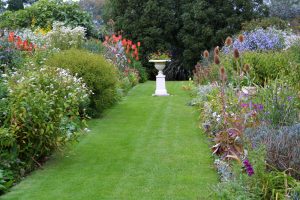 One of the largest Spanish chestnuts in the country greets you on arrival to 3.5 acres (1.5 hectare) of lawns and shrubs surrounded by magnificent beech and oak trees. A wonderful walled garden behind the house contains many unusual plants and flowers in the herbaceous border. The grass paths take you past the pond with lilies and fish to espaliered apple trees, an arbour of old roses, a pergola clothed with wisteria and underplanted with hollyhocks and foxgloves and on to a vegetable garden. A summer house at the end of the garden in a sheltered corner provides a quiet area for rest and relaxation.